Common Waste Items Which Cannot be Disposed of Easily

Advancements in technology, chemistry and manufacturing have given households and businesses equipment, appliances, machinery and items which are invaluable in making everyday life and business possible. Problem is that many of these use hazardous materials in their manufacturing process which makes their disposal a tat more complicated than just tossing them out for curb-side collection. 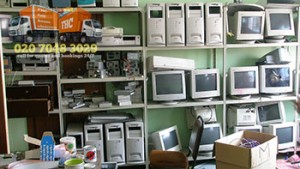 The most common examples of such items are the majority of home and office electronics (old and new), all types of fluorescent lighting including black lights, neon, UV lights, high intensity discharge lights, some household/kitchen appliances, etc. Initially, dealing with waste generated by the above products and items wasn’t such a big problem as simply there weren’t too many of them around. Eventually as technology became more and more advanced, most of these products and equipment began to turn obsolete in a matter of months, not years. People being people, or rather consumers being consumers were developing the habit of use-abuse-and toss out. This wasn’t going to be a sustainable consumer attitude for long. In turn manufacturers being manufacturers began responding to consumer demand with new generation products, brought out on the market (and discarded) sooner than their predecessors.

This couldn’t go on forever, although it did go on for quite a while, until many governments and environmental organisations said enough is enough. Not only are these products and items coming out in the millions every two or three months, but they created a large amount of hazardous waste which wasn’t subject of any recycling or reuse programs and policies. Many countries were quick to define, develop and implement policies and regulations covering the management of what is now known as E-Waste and household/office hazardous waste.

In the case of modern lighting, many tubes and bulbs still contain mercury – an integral element of their technology. Problem is that mercury is toxic and poisonous, it cannot be disposed of in landfills through curb-side collection type rubbish removal. Instead people need to contact relevant local authorities or visit the store where the item was purchased. Many manufacturers operating in certain countries are required to provide a so called product stewardship program which outlines and facilitates the methods and ways used for safe disposal and recycling of products which create hazardous waste.

In the case of E-waste, the problem is as much to do with hazardous waste created by such items as it is to do with the highly valuable metals and alloys contained in most electronic devices. Computers and hi-fi equipment contain certain amounts of gold, platinum, silver and other precious metal compounds. It makes sense to extract such metals from redundant electronics so they can be used again in the production of new ones. Discovery and extraction of ore for new precious metals is highly expensive and energy intense process which is becoming more costly by the year. Needless to say, many old pieces of electronic equipment contain toxic substances and gasses which also need appropriate disposal and reprocessing. There is still a long way to go but sustainable recycling practices are becoming more and more a reality.