Origins of Recycling – A Brief History

Recycling – the process of reusing and repurposing useful waste has been around since the dawn of human civilisation. The first ever known advocate or promoter of recycling as a concept and practice was Plato, about four hundred years BC. Recycling domestic rubbish or junk is perhaps one of the earliest forms of recycling. Archaeologists and historians are quite confident in these theories and conclusions as excavations of ancient waste dumps shows less garbage and rubbish in periods of resource and material scarcity.

The next proper attempt to recycle items and materials, dates back to the pre-industrial age, and takes place in Europe. Strong archaeological evidence from the period indicates that scrap bronze and other metal rubbish was collected and then melted down for perpetual use. Another good example of rudimentary yet effective recycling practices comes from pre-industrial Great Britain, where dust and ash from fireplaces, furnaces, ovens etc. was collected by people known as dustmen. After that ash and soot were downcycled in order to become base material for brickmaking.

In those days, it was more economics than environmental concern that was the main drive behind those first recycling practices. The opportunity to receive useful raw materials from junk and rubbish and use them to make profit was quite the revolutionary thing and many savvy individuals were already on the right track. Perhaps the other reason why recycling picked up as a practice was the lack of organised public rubbish removal in towns and cities.

One of the first jabs at proper recycling with proper results in the industrial era, was in the early eighteen hundreds when one Benjamin Law developed a method to turn and process rags and discarded fabrics into shoddy or mungo – a type of wool. Of course the process wasn’t perfect so the new raw material had to be combined with a bit of natural virgin wool. Making shoddy picked up as a trend, and eventually there were towns in England which were heavily engaged in this new type of industry. Shoddy was made in some places around the country as late as the nineteen twenties.

With the industrial revolution, also came the need for metal. Metal resources weren’t easy to come by as mining and extracting metal ore was hard, inefficient, expensive and dangerous. In result, it was metal junk and rubbish that was the material of choice for many factories and industrial sites. In particular it was ferrous metal junk that was the most valuable as it could be used for making a whole bunch of things yet it costed much less than 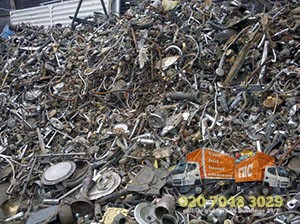 having to mine the ore. During the eighteen hundreds it was the big railroad companies that were the biggest demanders for scrap metal and ferrous junk. So were shipbuilding yards though to a lesser extent. Toward the end of the nineteenth century it was mainly steel foundries that needed metal junk and scrap. At the start of the twentieth century (prior all the world wars) it was the quickly developing automobile industry that needed the most scrap metal.