Browse: Home » Quick guide of the Borough of Ealing

Quick guide of the Borough of Ealing

The London Borough of Ealing lies in the western parts of the city and covers an area of 21.44 square miles. It is home to a population of almost 350.000 and has a density rate of 16.000 people per square mile. Unlike most London boroughs, Ealing isn’t the location to any major and internationally known landmarks. On the other hand, the area is home to some of the city’s finest educational institutions including the Japanese School in London.

Acton is one of the largest districts of Ealing and lies in the eastern parts of the borough. It has a population of over 60.000 people and is located at about six miles from the junction of Charing Cross. St. Mary’s Church is arguably the area’s most notable edifice. It is situated on King Street and is known for its red brick façade. The above mentioned Japanese School in London is located in Acton, W4. The district is linked to the other parts of London via several railway and tube stations.

Hanwell, W7, is a town that is situated in the western parts of the Borough of Ealing. It is home to several places of interest such as:

Also several of the finest schools in the borough are located in Hanwell. The Drayton Manor High School was founded in 1930 and is arguably the best in the area. Presently it provides top tier secondary education to over 1.500 students.

The suburban district of Ealing is the administrative centre of the borough. It has a population of over 100.000 inhabitants and is situated at about eight miles from Charing Cross. The Perceval House, Ealing Town Hall and Façade of the Walpole Picture Theatre are beyond any doubt the area’s most recognisable landmark. Ealing, W5, is served by its own station which was opened in 1838 and is one of the oldest still functioning rail links in the English capital. The station sits on lines from both the London Underground and the National Rail Network. 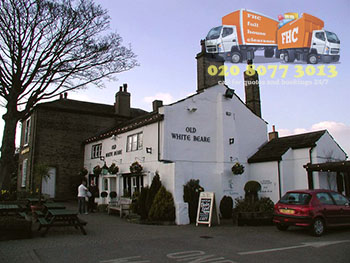 Norwood Green is an area with a population of about 15.000. It lies at exactly four miles from London’s main airport, Heathrow. The area is adjacent to Heston to the south, Boston Manor to the east, North Hyde to the east and Southall to the north. Three Bridges is the most notable site in Norwood Green, UB2. The junction was designed by renowned Victorian engineer, Isambard Kingdom Brunel.

The district of Southall, UB1, lies in the western parts of Ealing and has an estimate of 30.000 inhabitants. The local gasholder is one of the area’s most remarkable structures. It was constructed during the early 1930s and is almost 100 metres tall which makes it easily visible from great distances. The Gurdwara Sri Guru Singh Sabha (largest temple of its kind outside of Asia) is another well-known Southall landmark which attracts both local and foreign visitors.

Greenford, UB6, is a large suburban area which lies in close proximity to the aforementioned district of Southall. It is the location of the London Motorcycle Museum which was founded in 1999 and is dedicated to the history and development of the British motorcycling industry. Recent numbers show that the venue is visited by approximately 250.000 people on a yearly basis. The Greenford Heritage Centre is another well-known local museum which showcases British-made domestic items from the 20th century.

The town of Northolt, UB5, is one of Ealing’s most popular areas as it is the location of numerous famous landmarks such as the church of St. Mary the Virgin, Willow Cottages, the Northolt Green Clock, Down Barns Moated Site and more. Northolt is served by its own tube and railway station. The underground hub is the busier of the two as it provides transportation services to over five million people on a yearly basis.

The district of Perivale is home to the Hoover Building which is one of London’s most beautiful Art Deco edifices. It was constructed in 1933 for the Hoover Company and was designed by Wallis, Gilbert and Partners. St. Mary’s Church is another-well known structure in Perivale, UB6.